Richard Cameron, Managing Director of Lascar charts the evolution of the LED and LCD display

Since the early days of electronics, designers of consumer and industrial products have included status indicators in their devices. These lights informed the user that everything was functioning correctly – or indeed incorrectly. When products and systems became more complex, the desire grew for increasingly detailed system information and measurements. Soon, the humble neon bulb and red or green LED gave way to more informative types of display.

The process of incorporating a display into a design followed one of two paths. The electronics design engineer could purchase the basic LCD or LED display, add one or more driver chips and a microcontroller, and write their own software in Assembler or C to make it all work together. Alternatively, some of the complexity and workload could be reduced by incorporating an off-the-shelf display module. This typically consisted of an LED or LCD and some display control circuitry on a PCB, held together in a plastic or metal carrier. Both options tended to be time consuming for the hardware and software design engineers, and any alterations made to the final design could incur significant and costly re-tooling and expensive time-to-market delays.

The content constraints of the single-colour, segmented displays paved the way for the adoption of character and graphics dot matrix displays with increasing resolution and colour depth. The popularity of smartphones, tablets, etc. has driven the demand and acceptance of inexpensive TFT LCD and OLED displays in other electronic devices. Display manufacturers now commonly integrate touchscreens into the fundamental design of their products. 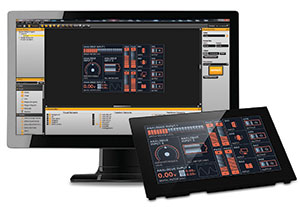 In the 1980s, low cost microcomputers opened up prolific computer programming by the masses. In a similar way, the emergence of cheap single-board computers, such as Arduino, Beaglebone and Raspberry Pi, has now opened up electronics design and programming to a very diverse range of people, without any formal electronics training. High-level programming languages, such as C and Python, and visual methods, such as Scratch, Ardublock and GraspIO, have simplified programming to the point where even children now regularly produce impressive working designs. With very little engineering training, the easy availability of electronic modules and free software libraries reduces design time from several months to a week, a day or even hours.

Display manufacturers such as Lascar Electronics have recognised this trend towards, and reasons behind, ubiquitous programming. They have taken the software design complexity away from the programmer and transferred it to the display module. Using PanelPilotACE Design Studio software, users can now produce simple or complex display projects by configuring display elements.