The need to quickly identify and resolve microbiological contamination in drinking water systems is well understood by water utility companies.

Failure to spot problems can be extremely costly, both financially and in terms of reputation. Likewise, dealing with false alarms can waste valuable time and resources. Colilert-18®, from IDEXX, has been trusted by water utilities worldwide for more than 20 years for the detection of coliforms and E.coli in drinking water, sewage, raw water and bio solids. Its speed to confirmed results, in just 18 hours hours, as well as its other advantages over traditional membrane filtration methods, have seen it achieve global regulatory acceptance in over 40 countries, and become the new ISO standard 9308-2:2012. In 2013, over two billion people globally were served by Colilert tests. 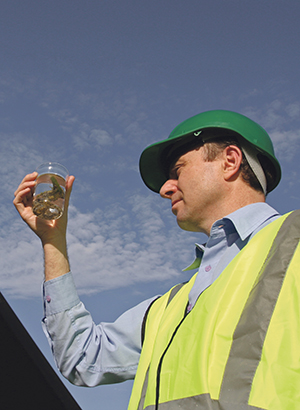 In October 2015, Colilert-18 was specified as a reference method in the European Drinking Water Directive 2015/1787. The amendment to the Directive now states that “EN ISO 9308-2 (Colilert-18) provides all necessary specifications for performing the enumeration of E. coli and total coliform bacteria.” The text has to be transposed into national legislation within a period of 24 months by the EC Member States, by October 27th, 2017 at the latest. Using Colilert-18 on a long term basis delivers precise results rapidly and the confidence in results for water network operators. Detecting coliforms quickly and accurately reduces the prospect of sporadic contamination events caused by the spread of biofilm through systems. Subsequent remedial activities can be extremely serious, especially if actions such as hyper-chlorination of distribution systems, cleaning up biofilm and even replacing pipes are forced upon network operators, so removing uncertainty and doubt from test results ensures the ongoing maintenance of the network, regulatory compliance and the safety of the consumer.

Speed and Efficiency
Tests come pre-weighed and pre-packed and there are no media preparation steps, reducing the actual hands-on time to prepare a sample to just one minute. Conclusive and confirmed results are available in 18 hours, allowing any necessary remedial action to be expedited immediately.

Combining the Colilert-18 test with the easy to use IDEXX Quanti-Tray® system displays results in a series of wells where a yellow colouration shows the presence of coliforms and fluorescence under UV light indicates if E.coli is present. 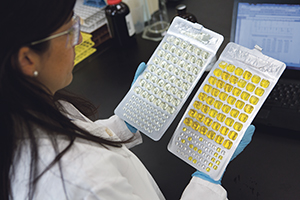 Accuracy and Confidence
Colilert-18 tests significantly reduce both false positive and false negative results and provide operators with results that are accurate, non-subjective and require no further confirmation steps.

Specificity and Sensitivity
Colilert-18 suppresses the growth of non-target organisms, making the test both specific and highly sensitive. A single viable coliform or E. coli per 100 ml sample can be detected.

Quality and Assurance
In addition to the IDEXX Water QC laboratory being ISO 17025 accredited, Colilert-18 is now ISO 11133 compliant, giving users considerable advantages over those that are reliant on other, non-compliant products. Customers also benefit from IDEXX taking full ownership of the entire test process. If any element of the methodology falters, whether it is the equipment or an abnormal result that cannot be explained, technical support is always available.

Versatility
Colilert-18 can be used on all raw water samples, whether from rivers or reservoirs. The accuracy and ease of use is beneficial in testing raw water which contains a lot of background flora that is suppressed using Colilert-18, making interpretation of results much simpler. Furthermore, the test can be used on sludge cake, where it is important to show a sufficient reduction on E. coli from raw sludge before it is released, as it is used as a fertiliser and could enter the food chain.