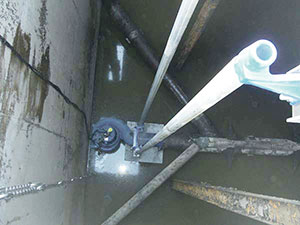 The need for energy savings, improved carbon footprint and lower whole-life costs is becoming an important driver for innovation in Anglian Water. As a result KSB Amarex KRT duty standby pumps were installed in their Jet Aeration tank at the Southend site to replace existing pumps.

KSB Amarex KRT is a vertical, single-stage submersible motor pump in close-coupled design. It is available with various impeller designs and can handle all types of abrasive and aggressive waste water in water & waste water engineering.

Two submersible KSB Amarex KRT pumps were installed at the outlet base of the jet aeration tank, with suction level at the pump at 0.5m, discharging to a 400mm GRP pipe down the centre of the 32m long x 12m wide tank. The KSB Amarex KRT pumps are rated at 370 l/s delivering against a static head of 5.18m and friction head of 0.91m, giving the total developed system head of 6.1m. A 200mm air pipe is mounted above the water pipe and the air/MLSS flow is Jet Aerated through 32 nozzles.